The moment I stepped foot onto Summit View Farm I felt home.

Let’s back up to a week prior. My husband and I had just put the kids down to bed. I walked into our bedroom to find him on his stomach on our bed, scrolling through some pictures on his iPad. He said “hey, come look at this”. There on his screen was an old white farm house. I started scrolling through the pictures and saw a lot of old buildings, all worn by the years of neglect but architecturally still very much in line with what we had envisioned. It’s one thing to find an old farm with an old house on it. But to find one with the house you envisioned is more difficult.

Dan looked at me and said, “You should fly to Missouri and go see it, this weekend.”. I thought he was crazy. He insisted that he didn’t need to see it in person, he already loved it. But he knew if I was going to be supportive, I would need to see it.

It wasn’t the right timing. We hadn’t planned to move for at least another year. It wasn’t the right size, only 22 acres. We wanted closer to 50 when we started. But it was perfect, still. The location was in the school district I grew up in, not something I previously thought would even be possible. It was just a few miles from both of my parent’s houses. The price was uncomfortable but not impossible.

I flew in the following Saturday morning. I advised my parents and my sister. My sister and brother in law should have their own HGTV show, they’ve renovated and DIY’d every house they’ve ever lived in. I knew they would be able to tell me what I’m getting into.

We drove up to the farm and the road was closed for construction. So we had to go the long way around. I remember as we got closer and closer my heart started racing. I was so anxious to see it. It couldn’t be this perfect, could it? I prepared myself for the other shoe to drop. I knew there would be reasons why this wasn’t THE one.

The farm is at the top of a hill. As we climbed the hill to the driveway, I caught my first glance of the house. It was exactly as the pictures showed it. The driveway, the horse barn, everything looked exactly like the pictures.

I stepped out of the car and greeted our realtor. She happened to be the wife of a close friend and was generous enough to help us out by showing us the place. I tried to act casual but I was giddy. I handed my phone to my sister and told her to take as many photos as she could. I grabbed my notebook and we started walking.

Farmhouse from the road

Another shot of the farmhouse

Sunset from the riding arena

Even though it is minutes from civilization, it’s hard to even see it. It’s very peacful. 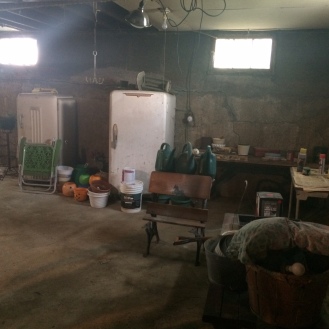 The basement also had small indications of a fire 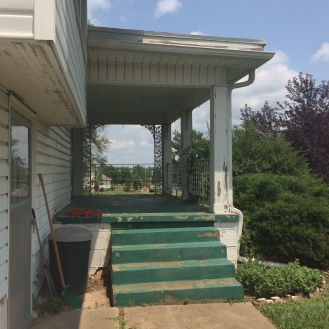 The steps to the porch are concrete 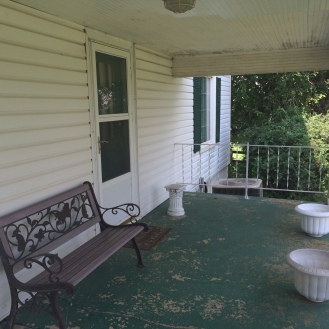 The front porch needs a lot of work. It was covered in peeling green paint

View from the front porch looking at the subdivision across the street.

The front drive is lined with these trees.

Looking across the front drive to the two care taker’s homes on the property.

The back porch of the farmhouse with the same lovely green painted concrete. 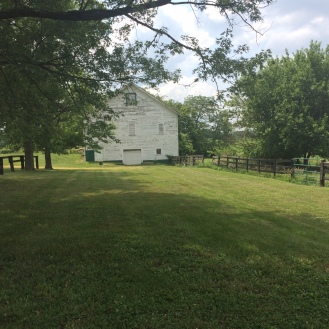 To the right of the hay barn, you can see the edge of the property where the tree line is. 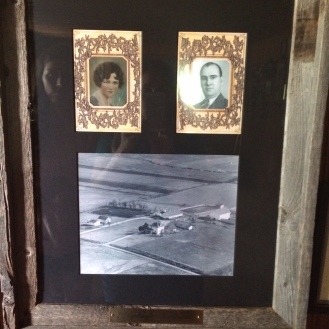 The farm office had an aerial view of the farm before all the additions, and the original owners Serena and Doc Enoch

The office held tons of photos of previous horse competitions.

The group of us were completely in awe. It felt like stepping back in time when we entered the horse barn.

The horse barn has about 40 stalls 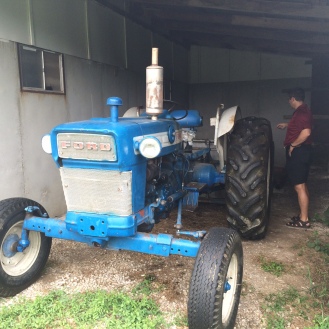 This old Ford tractor still runs. We purchased it with the farm.

The dining room was dim and covered in wood paneling 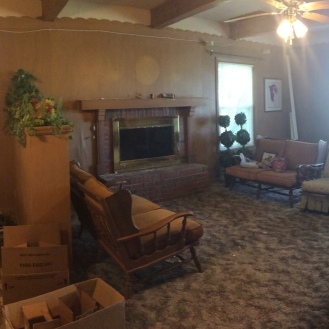 The panoramic of the dining room and living room. The owner is sitting there on the phone.

The kitchen was covered in plywood with knotty pine veneer

The stove and oven had never been used. We found the manual inside the pristine oven.

the carpeted stairs going up to the second level 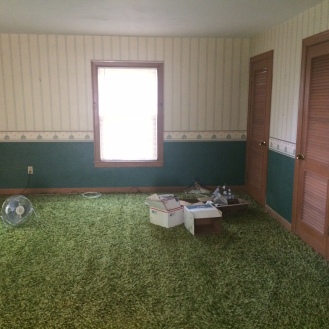 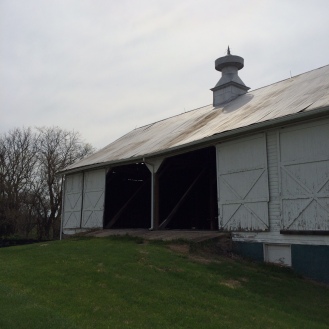 My favorite barn is the hay barn. It’s over 100 years old and eligible to be registered with the National History Society.

Another view of the hay barn 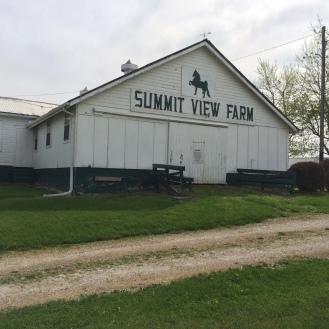 The front of the horse barn displayed the name. We decided to keep the name to honor the history.

An hour later, I was in love with this old, run down place. It was already mine. Now I just had to figure out how to make sure I didn’t lose it.

The following weeks were filled with roadblocks. Haggling over a price, various inspections, consulting with contractors. Everyone had a reason why this may not be a good decision. There were many weeks when Dan and I were convinced we’d lost the property.

One roadblock came on a Friday night and I thought it was the nail in the coffin. The appraisal came back and was over $100,000 below our offer. We knew it was a possibility the farm may not appraise for our offer. The owners had valued it as a development property and not a farm. The appraisal, though, valued it as a farm which is a completely different structure. It was an all time low. We had resources to come up with the cash difference but it would mean cashing out some investments we’d made throughout the years and worked very hard for.

It wasn’t something we were comfortable with so we told the owners we couldn’t swing it.

That’s what people would say to us. And every time I wouldn’t really respond.

The truth is, we don’t believe in “meant to be” in our house. We believe if you want something, you find a way.

Dan was sitting on our couch and he very seriously told me he wanted to find a way. Even if it meant doing things we were uncomfortable with, he wanted this that bad. So, I said, “Ok, let’s get it.”

The following Monday we called around and found a local bank which issued portfolio loans. We explained our situation and asked if they would be willing to loan us the money. Since it was a private bank and not backed by Fannie May, we would have the opportunity for a new appraisal. It was a long shot but the loan officer was very encouraging.

We applied for the new loan, scheduled a new appraisal and held our breath.

The appraisal came back right on target. The farm was ours.

The next few weeks went by in a blur. We decided Dan would go back to close in person and I would close remotely. This would give him the chance to go to the property and change all the locks to secure it. The next several months the house would sit empty and we wanted to make sure it wouldn’t be vandalized.

The closing day came and wouldn’t you know, everything went smoothly. We were told the owner got emotional when signing the papers. I can’t imagine selling something which was a part of your family’s history. We had assured him in a letter of our intentions to honor the history and I was told that comforted him. He gave us a written history of the farm, dating all the way back to when it was first deeded from the US government.

Now our name is on that history. That feels amazing.

The journey to renovate and repair the farm was still ahead, but the moment it became ours, the next chapter of our lives began. I have to say, I knew in that moment it happened because we made it happen.

Maybe you believe in destiny. Maybe you believe some things are meant to be. I just don’t. We believe things happen because you decide to make them happen and you find a way. We are the owners of this farm because we didn’t give up. I’m proud of that most of all.